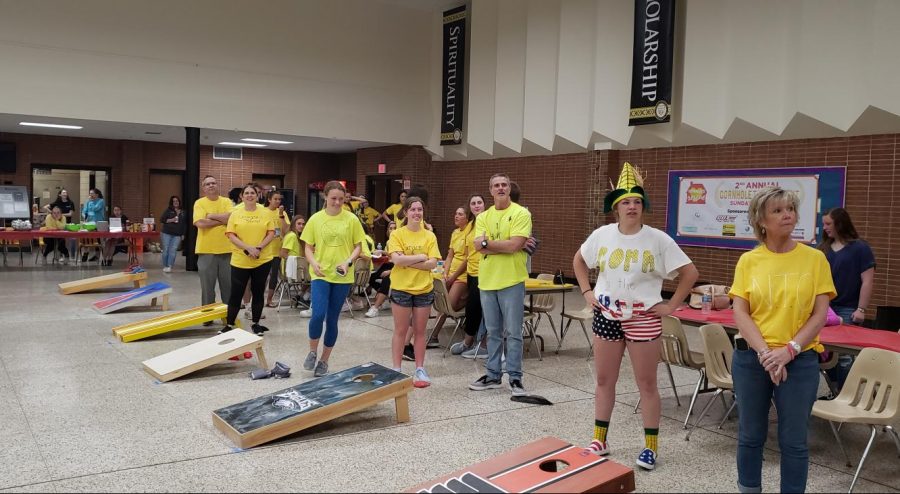 Players pause their games to watch the corn on the cob eating contest at the Ronald's Rescue Cornhole Tournament.

The Ronald’s Rescue club is dedicated to spreading awareness about the Ronald McDonald House, an organization that helps children who are very ill. To raise funds for the charity, the club held their second annual Ronald’s Rescue Cornhole Tournament in support of their work. On Sunday, April 14, teammates and spectators decked out in yellow gathered in the cafetorium to play for a worthy cause.

By making some improvements to the event, the tournament attracted eighty participants making up thirty-four teams. The club also invited extended family members and students from other schools to share in the celebration.

“I have always, since the very beginning of Ronald’s Rescue… wanted to try to capture whatever space we had in this spring event and really kind of [turn] it into a community,” Sheehan said.

Sheehan pointed out that the cornhole tournament was a great way to celebrate the club’s year together before the following months become hectic with graduation preparations, planning for the summer, and final exams.

“It’s not just about the organization and the the event,” he said, “but it’s about a celebration of the community, especially at the end of the school year… to have a nice day in the sun to definitely raise some money and do some good things.”

Ireland Giaquinto, a junior on the club’s student leadership team, said she was very excited about the turnout of this year’s tournament. Although the weather was not in their favor, the club successfully moved the competition from outside to the cafetorium at the last minute.

“We already had some of the basics planned out, but it came together in, like, these last three weeks,” Giaquinto said.

The planning team decided to add more games and entertaining activities other than only cornhole at the tournament. Giaquinto said that this offered an opportunity to increase the funds raised for the cause.

“We have Can Jam, we have Ladder Ball, we have an obstacle course, we also have the corn eating contest,” she said. “As a way to get more money to donate to the House, we also have… a 50/50 [raffle].”

Giaquinto explained that the money raised at the event would be used to pay for children’s rooms at the Ronald McDonald House.

“Every room is fifty dollars a night per family,” she said. “Because of the medical bills and all finances that they’re putting towards other things, some families don’t have the money to put up for a room.”

It felt very important to Giaquinto that the proceeds were going to children in need at the Ronald McDonald House and not just to her club.

“We’re raising money for this cause, so we’re trying to get the optimal amount that we can get to the Ronald McDonald House,” she said.

Sheehan “genuinely enjoys” seeing the participants’ creativity, especially in their team names and t-shirt designs. Some highlights include “Corn in the USA,” “Ivy League Rejects,” and “It’s in the Bag.” Team members said that they enjoyed playing in the friendly environment.

Sophomore Anna Thompson competed in the tournament as part of “Team Thompson.” A member of the Ronald’s Rescue club, she thought it would be “a lot of fun” to support the cause.

“It’s important to me because I was in the hospital when I was an infant,” Thompson said, “so it was really important for me to support the Ronald McDonald House so other families can have an opportunity to have good medical care at A.I. [Hospital].”

Before the event commenced, Thompson said she was happy just to play in the tournament and participate in the other activities to support a worthy cause.

Sheehan wanted the participants to notice how much went on “behind the scenes” in organizing the tournament. He thinks it is important to recognize the amount of work that the club leaders put into this event as they give back to society and the Ronald McDonald House.

“While it’s definitely meant to be a fun and exciting and kind of collective experience for everybody,” he said, “I never want people to… forget the, sort of, mission and purpose behind why we’re doing it.”

The Ronald’s Rescue Cornhole Tournament is not just a game, Sheehan said. Small actions such as participating in this tournament can go a long way, especially when they are done in support of sick children and their families.

“It seems like nothing, maybe just like a quick minute or two of fun,” Sheehan said. “When you take all those little tiny moments and you add them up… it really has a seismic impact in the lives of people that really need it.”