Impeachment: What You Need To Know 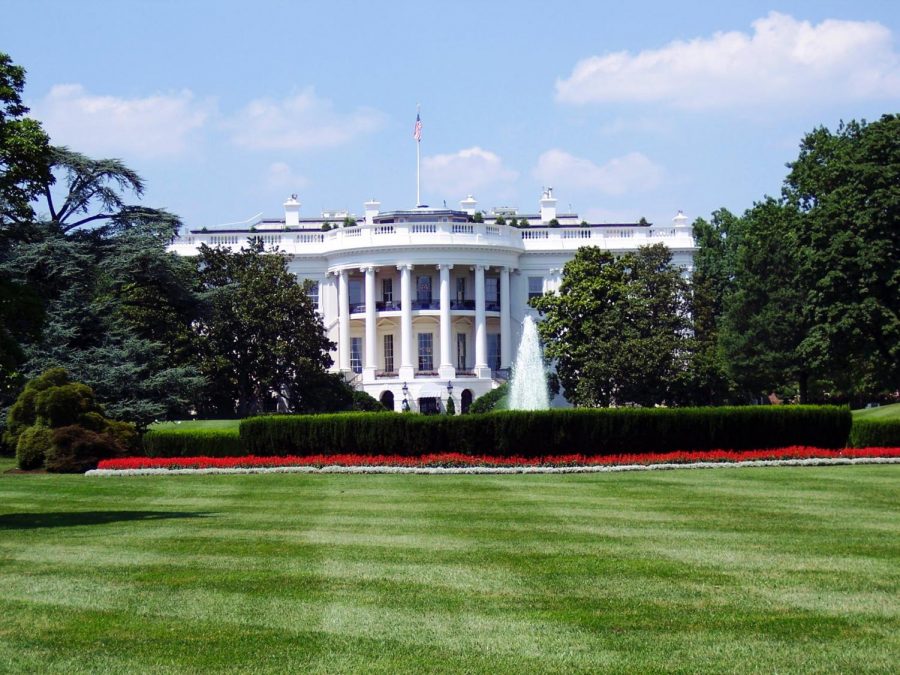 The news of the impeachment shocked Washington and the world.

“The President, Vice President and all civil Officers of the United States, shall be removed from Office on Impeachment for, and Conviction of, Treason, Bribery, or other high Crimes and Misdemeanors.”
-U.S. Constitution, Article II, Section 4

On September 24, a formal impeachment inquiry was launched against President Donald Trump. This announcement sent shock waves through Washington and the American people.

Impeachment isn’t a new thing, in fact, the concept came from Britain. “Most of our constitutional rhetoric is taken from the British common law system,” said Social Studies teacher Mr. Mahler. However, we changed impeachment by extending it to presidents, which the British would never do for their kings. “Alexander Hamilton and the founding fathers in the Federalist Papers essentially layout impeachment as one of the major distinctions between our form of government and the British monarchy,” Mahler said.

The writers of the Constitution adopted the idea of impeachment to ensure that the president would not become a tyrant. They wanted to make sure that no one would be able to have their power go unchecked. 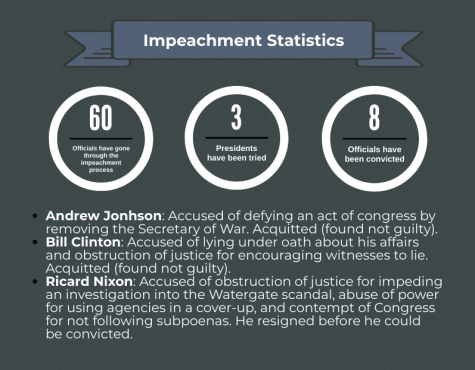 Abigail C. ’21Impeachment isn’t a new issue or one reserved only for the president. It has a complex history.

Mrs Markham, a teacher of various Social Studies courses, has lived through two of the three presidential impeachment trials. “I tell my seniors that I was their age in 1973 when the Senate Watergate Hearings commenced.”

In short, there are three major events that must take place in order for the president to be impeached: the findings must be found sufficient by Judiciary Committee, the majority of House must vote on the articles of impeachment, and the Senate trial must amass a ⅔ vote on at least one article of impeachment.

For the Trump impeachment, the process is still in the early stages. The House recently passing a resolution that outlines their inquiry into Trump. On Wednesday, the first public hearing will be held.

During the trial, the House and Senate will investigate if President Trump broke the law by pressuring the president of Ukraine to investigate the actions his political opponent’s son, Hunter Biden. 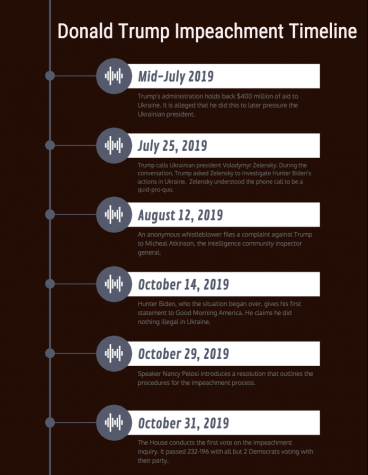 One thing that will differentiate this impeachment from past impeachments is that, “…all impeachments so far have dealt with domestic issues…. This one is the first one that deals with foreign policy and what is the acceptable use of executive power to get foreign governments to investigate political rivals,” Mahler said.

With the proximity of the impeachment investigations to the 2020 election, it is unclear how Trump’s re-election will be affected.  “…the results could go either way. Voters who already support Trump may stiffen their resolve feeling that the Democrats are seeking a ‘smoking gun’…,” said Markham

Although the impeachment is often seen a difficult topic that’s too political to discuss, it’s important that students are informed. “…you are the future generation of voters and you need to be able to make good decisions… We need to understand the political process and the role that every American citizen plays in it,” said Social Studies teacher Dr. Bozanic.

Even though impeachment is a long and complicated process, it is essential to the American legal system. “This is one of the most essential checks and balances, especially on executive power,” said Mahler.

No matter what your personal opinions are on the current impeachment, it is the Constitutional right of the American people to hold politicians responsible for their alleged actions. In the end, as Markham said, “The impeachment process reminds us that lawmakers we send to Washington have a responsibility to us.”