Caught Between Two Worlds: The Struggles of First Generation Americans 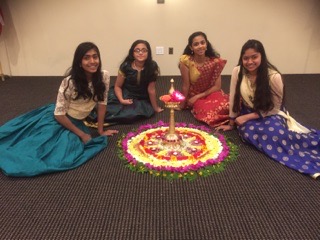 The celebration of another Indian festival. These cultural festivals, which go back many years, involve religious and local traditions.

“When I was younger, I didn’t like my culture at all, and I wanted to be a different person completely,” said student Amanda Jose about her upbringing as a first generation American.

Feelings like this among children of immigrants are common. They face unique challenges relating to their peers, finding a sense of belonging, and reconciling American culture with the expectations of their parents, which stem from a country they may or may not feel a connection to.

However, there are many positive aspects to being a first generation American. It is a wholly remarkable experience that offers a unique cultural blend and the opportunity to perceive life from two different perspectives.

One thing Tolu Fajinmi and Minjie Paark, two other first generation Americans, had in common with Jose was that their parents brought cultural traditions from their home countries.

“My culture is a great part of my life, and so my parents have brought back a lot of cultural traditions from India,” said Jose.

This includes an Indian prayer group that meets every Friday, as well as every other Sunday. The entire community is made up of Indian immigrants from Kerala and their children.

They celebrate many religious traditions together, especially during Holy Week. Jose’s community also celebrates cultural festivals that many Indians also celebrate, such as Onam, Holi, or Diwali.

Tolu Fajinmi is the daughter of Nigerian immigrants. Religion is a big part of Nigerian culture, and plays a large role in her life: “I was always taught that God is the center of my life and I was raised in a Pentecostal church called CAC (Christ Apostolic Church).

Fajinmi and her family do not go to services on Sunday. However, they do participate weekly in Bible studies and other programs, like their church’s youth group.

A move from one country to another can affect a family for generations to come, according to Tomás R. Jiménez, a professor of sociology at Stanford. American influences and peer pressure can affect how strongly a first generation American identifies with their cultural background. U.S. born immigrant children tend to be more adept than their parents at picking up Western culture and language, since they grow up in it.

Jose said she does not identify strongly with her parents’ culture, despite the big role it plays in her life. She doesn’t completely speak Malayalam, her parents’ native language. As Jose became more exposed to English, her ability to speak Malayalam slowly faded away.

Other students associate more with their parents’ culture. Fajinmi says that her parents have passed many of their values and traditions on to her, so they have become an important part of her daily life.

“I identify with the Nigerian culture so much. If asked for my nationality, I often say ‘I’m Nigerian-American’…and I can speak our native language, Yoruba. While not amazingly, but I can say a few phrases and full sentences.”

Fajinmi loves being able to communicate with her parents and others who speaks her native language. “I love my language and I love our traditions,” she said.

First generation Americans also have vastly different upbringings than their peers, which are infused with the values their parents brought from their home country. “I think that my family cared more about academics than most of my peers, or at least tried to. I remember being surprised when my friends didn’t do extra math over the summer and just went to beaches and parties, and I also remember being a little jealous about it…but the work over the summer helped me get ahead and make my school year less stressful and more rewarding.” said Minjie Paark, who is the daughter of South Korean immigrants.

However, Jose said she feels that because she was raised differently, she argued with her parents more. In turn, this caused them to grow apart. “I do think that my parents have raised me differently than a lot of the stereotypical American children. There is a stereotype that Indian parents are strict, and for me that stereotype is true. It was hard growing up with that because it caused me and my parents to grow further away from each other, and when I see other families who are so close to each other, it makes me both sad and bitter because I’ll never have what they have..” said Jose on this darker aspect of growing up a first generation American.

These childhood differences cause the children of immigrants to feel isolated from their peers and struggle to find a sense of belonging. They don’t see many people that look like them, which only increases feelings of alienation.

According to Fajinmi, first generation Americans face many struggles. “We have different ways of thinking and how we act because of how we were raised. And the chances of most people around us not being first generation immigrants are pretty high so the ways we act are different than how they do and that can put a strain on things” she said.

Paark recounted that, from her own experience, immigrant children have a language barrier. They often don’t hear English at home, making it difficult when they go to school for the first time and have to learn a different language than what they were brought up with.

“I remember that on the first day of preschool I was sad because I was trying to ask for more water, but I didn’t understand how to say that in English, and I also remember crying because I thought everyone was running away from me when actually everyone was just going to recess,” Paark said.

“I think children of immigrants have to struggle with finding where they fit in between the two cultures,” says Jose. “It’s hard having to being able to adapt to not only one, but two cultures. It’s hard fitting in with each culture’s societal values and stereotypes when they’re so different.”

Jose also says that she has struggled with being accepted in the community of Indians she was raised in. “I feel like I’m being judged because I fit in with the American culture more than I do with my Indian culture,” she said.

But for all the challenges they face, first generations have an advantage. Acculturation builds “resilience”—a term that reflects the tendency of children of immigrants to be unflappable or have grit. While some of them want to change some aspects of their life, many wouldn’t give up their heritage for anything.

For Jose, growing up brought the acceptance of who she is. “Now that I’m older, I have learned that I can’t change and that I should accept the way I am and should accept my culture. If I could change anything about my heritage, I would get rid of the stereotypical strict Indian parents. Sometimes I feel like if my parents and I were from another culture, we would get along somewhat better,” Jose said.

Fajinmi weighed in on her thoughts about reconciling a strict upbringing with the effect it has had on her as a person. It was difficult at times because she was raised differently than her peers in school. “Certain things I wasn’t allowed to do made things difficult and the strictness of my parents was definitely a big factor.” she said, “But I wouldn’t change it at all because all of our traditions has shaped me into the young woman I am today. I don’t think I’d be this way if not for how I grew up. I’m unbelievably proud to be the daughter of Nigerian immigrants.”