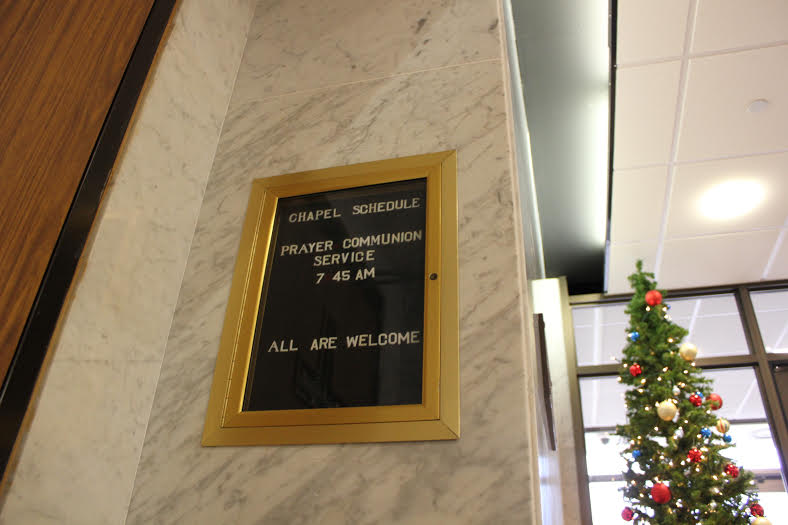 Being a Non-Catholic at Padua

In a school dominated by Catholic morals and values, those who don’t hold similar views still have the opportunity to attend. Padua Academy advertises that it holds its doors open to people of all faiths, though many non-Catholics feel that attending a school where the Catholic religion is promoted is still reasonable. With prayer multiple times a day, monthly mass, and countless prayer services, religion makes up a considerable part of the typical Padua students’ day.

PADUA IS WHAT IT SAYS, CATHOLIC 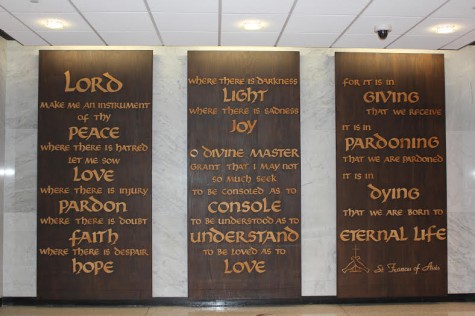 Prospective students are made very aware of how important religion is at Padua Academy. The Padua website says, “As a community rooted in the Gospel and modeled on the values of our patrons St. Francis de Sales and St. Francis of Assisi, we take great responsibility in supporting the faith development of our students.” Just by glancing at the website, students know that religion will be a major part of the Padua experience. Non-Catholic sophomore Kennedy Crowder feels that she was fully prepared for the Catholic experience, “I knew exactly what I was heading into at the very first meeting. Padua is all about the prayer.” The school believes that by teaching religion, students’ lives can be changed for the better, even if those students are not Catholic. Padua advertises, “Our religious education program prepares students to accept responsibility for their mission of living the Gospel, nurtures in students the ability to make moral decisions, and fosters in students the desire to embrace the Christian lifestyle as a life-long journey of faith.”

Many students feel that Padua is what it advertises, “Christ Centered.” Junior Sarah Tomlinson says, “You know what Padua is all about the second you step foot in the building.” It is made clear that when you attend Padua, you are expected to attend Liturgy, listen to prayer multiple times a day, and attend religion class. Although these requirement do not align with the beliefs of some students, most do not object. Adair Bartram says, “it has been interesting to take religion classes and learn about Catholicism and the Bible. Especially because a lot of my classmates have gone to Catholic school their whole lives, so I’ve got to learn what their experiences were like compared to mine.” Padua is able to provide students with insight into the faith, even if those students have never heard it before.

Religion teacher and former Padua student Ms. Keefe says, “Being on the teacher side, I do think we say, we are Catholic, we have Mass, and we make it very clear what we are and how central it is to our school.”

RELIGION IN THE CLASSROOM

Every student is on their own faith journey, and all I want to do is help them take the next step.”

Differences of religion, although minor, come to play in the classroom because it is required that student participate in religion class for all four years. When asked about the role religion plays in class Crowder said, “When religion comes up, it’s much more of a conversation as opposed to ‘my views are right, yours are wrong’.” Crowder says that although she normally remains quiet in religion class, if she felt compelled, “speaking [my] views would not be a problem.” Other non- Catholics, including Franky Sedlacek and Bartram both felt similar to Crowder in the fact that teachers and other students would welcome their opposing views. Sedlacek says, “Although my beliefs align relatively well with Catholicism, differing views do happen, and I have expressed those feelings in class.”

Padua is open to all beliefs and that openness holds true in the classroom. Religion teacher Ms. Keefe says, “Every student comes with their own challenges, and it can be a challenge teaching students who aren’t Catholic, but it definitely isn’t bad.” Ms. Keefe says that if a student wanted to express their personal beliefs, it would be encouraged without a doubt. She says, “Every student is on their own faith journey, and all I want to do is help them take the next step.” Padua students of all faiths, from Christian, to Orthodox, to Hindu, are welcome at Padua. Faculty, campus ministry, and admissions do their best to assure that students from all religions feel like Padua is a safe place for students to say what they feel. 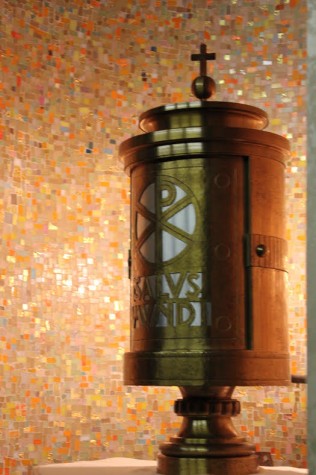 Some students come into Padua without a background in the Catholic faith. While at Padua, those students can become immersed in the faith. Senior Lindsay Wigo, who was baptized a Catholic but never received Holy Communion or confirmation decided she wanted to receive those sacraments in her freshman year.

Wigo says, “Coming from pre-school to 8th grade without a single religion class, I was intimidated. But, I think religion class played a part in my faith. I came into Sacred Scripture knowing absolutely nothing and I’ve learned everything I know now about faith at Padua.” Wigo was amazed at how supportive her group of friends at Padua were. She fondly recalls the day of her confirmation as a Catholic saying, “My group of friends freshman year supported me hugely. I came into school the day of my confirmation and my locker was decorated and had balloons on it.”

Although some students attend Padua without converting, some choose to make the leap of faith into Catholicism while attending Padua. Wigo says, “I decided to get confirmed at Padua because I felt like it was something that would make the next couple years at Padua better.” Becoming a part of the Catholic religion is no minor undertaking. It requires a significant portion of time, as well as faith beyond belief, but to those who accept the path Padua has laid out, faith is everything.

The remarkable thing about the young women of Padua is how open they are to friends of all religions. Bartram, a Non- Catholic student says she is, “really glad that everyone at Padua is treated equally regardless of religion.” Crowder was, “surprised at how indifferent people were to other beliefs, including [mine].” Friend groups are formed by interests in sports, activities and academics, not religion. Sedlacek, a Baptist, feels that, “there is little to no correlation between friends and religion.”

Spirituality is the first of the four S’s of Padua, followed by service, scholarship, and sisterhood. Ms. Keefe says, “Even if a student isn’t Catholic, I think no matter their faith, they can grow in their relationship with God.”