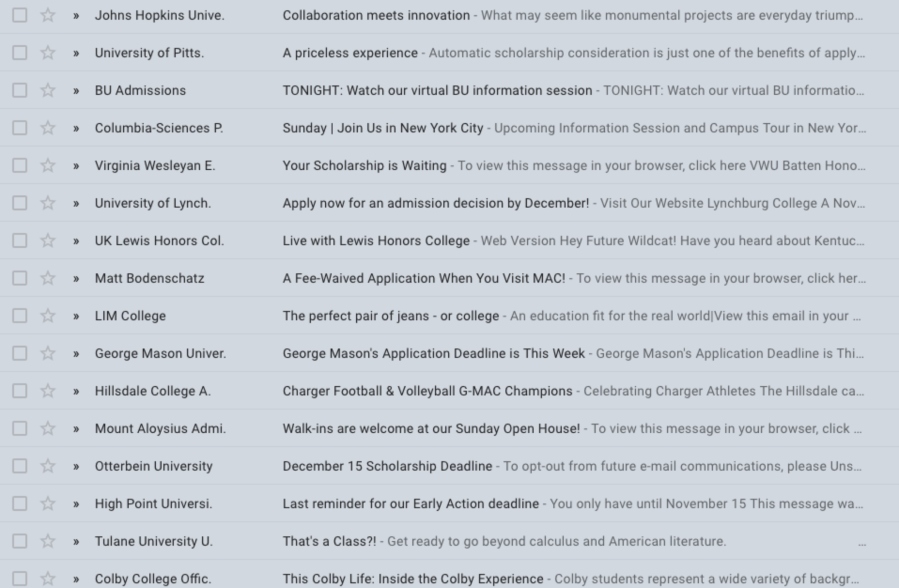 Bridget Bellew, a senior, estimates she receives over 20 college-related emails a day, many of which come from schools she has no interest in applying to. Her inbox is too cluttered to clean out anymore, she said.

“It makes me feel very overwhelmed, it puts more pressure to do this, get into this college,” said Bellew. “I open the ones I have on my list or the ones I’m applying to but all the other ones I just ignore.”

Bellew is one of many high school seniors who complain about the recruitment tactics of colleges aiming to get more applicants. “I feel like they want people to apply just so they can reject you so it makes them look better,” she said.

“I’ve gotten so many emails that they’re really the only thing in my inbox at this point,” said senior Olivia Lundstrom.

Lundstrom is hoping to go to a college with a welcoming, friendly atmosphere that offers many opportunities. The college advertisements she receives often boast of these features, but have not affected her list of schools to which she is applying.

“It’s honestly a waste of my time and theirs,” she said. “If I am interested in a college, I will reach out myself and ask them for information.”

Lindsey Misci, a senior, has not applied to some schools due to their recruitment tactics. “I only applied to schools because of my interest in the majors they offer,” she said. “The most emails I get a day are from the same colleges that I have never expressed interest in at all.”

“I think they do this because they know that you are the type of student they want and they really want money from students that will make them look good,” said senior Alexandra Sikorski. “It becomes aggressive when the same college emails you three times in one day.”

Sikorski deletes the college emails she receives, and finds she is less likely to look into colleges that email often.

“The schools that email me kind of turn me off, because it makes me feel like I am easy to them,” she said. “I just feel like you should only get emails from colleges that you want to get emails from, like a kind of subscribing. I am also curious about what is going to happen next year when I am in college. Am I still going to be getting emails? I just want it to stop, because I’m done applying and I don’t intend on doing anything else.”

When students take the PSAT and SAT, they can check a box allowing colleges to contact them by their email address, provided by the College Board. This is how colleges such as Washington College got Sikorski’s email.

“The College Board is where we get the majority of our names,” said Kelsey Miller, the director of admissions at Washington College in Chestertown, Maryland. “Other ways we can get names is through Naviance, if students select us on there we can reach out to them through that area. The College Board is more of a broad net because you don’t really know if these kids are interested in you.”

Miller described Washington College’s recruitment process as more selective than other institutions. “There’s research going on saying students are going to get, like, two trash cans full of mail,” she said. “We’ve really scaled back, like, let’s do three really good pieces that make an impact versus a bunch of little pieces that are just like postcards.”

Some students feel that they get college mail without having expressed interest in the institution. According to Miller, only students that have exercised some form of interest receive recruitment mail.

“We have prospects and inquiries—prospects are students that we might be interested in but we’re not really sure,” she said. “Inquiries have done something, whether it’s visit campus, clicked on some of our marketing materials, reached out to us by email, then they turn into an inquiry.”

According to The Harvard Crimson, Harvard’s 2018 admissions rate was 5.9 percent. Harvard sends out mail to students across the country every year with no intention of admitting the majority of them.

“I think that the world of Ivy League institutions [is] a completely different world—they’re battling,” said Miller. “Our applicants are more people to us because we get a smaller population, so we see the face behind it.”

Questions to Ask on a College Visit 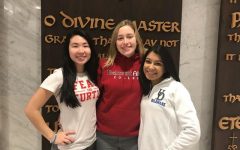 The Life of Seniors: College Acceptances