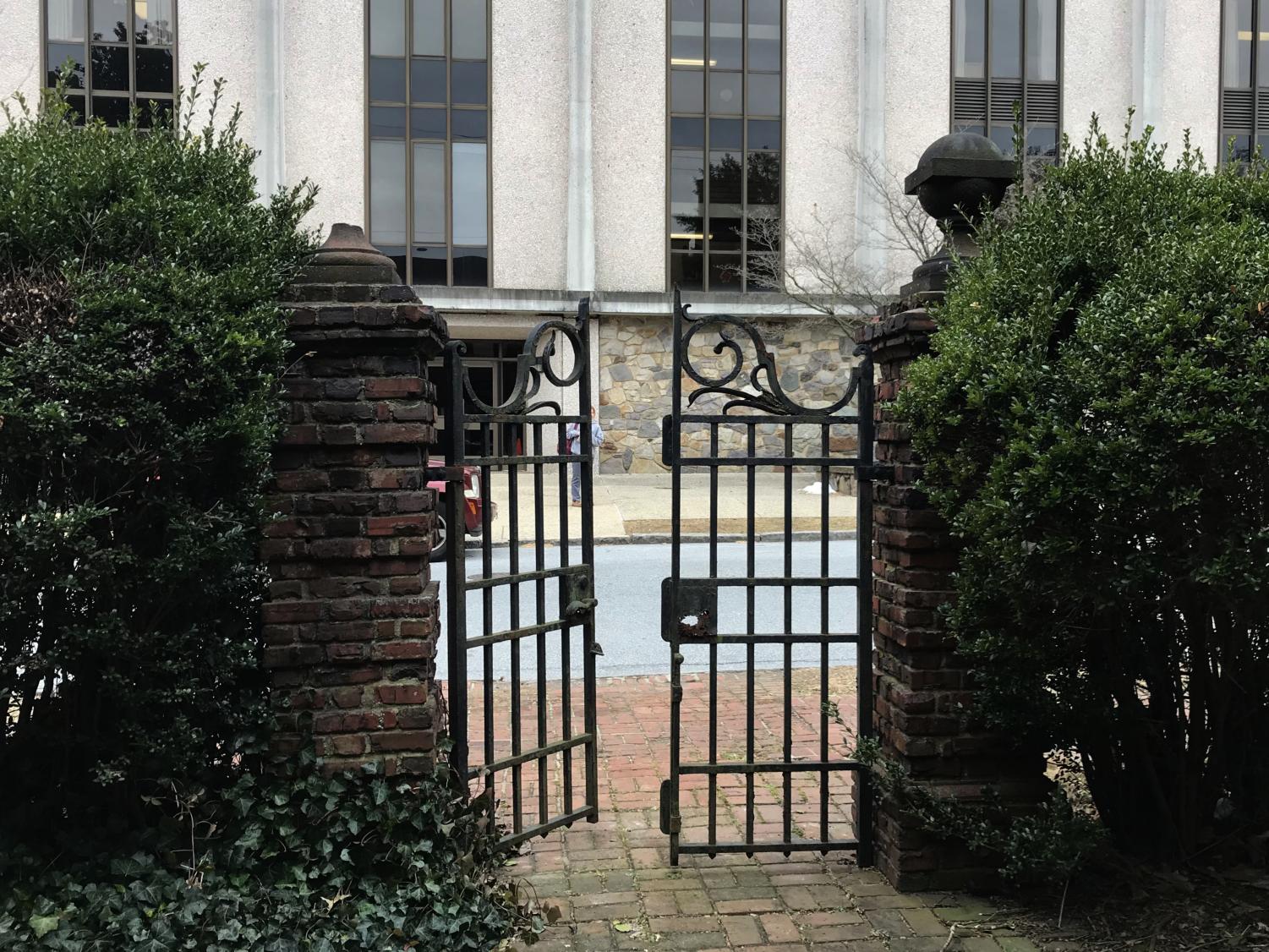 Most students see the convent every day, but many have no idea what it is or that it is owned by Padua. (Stella W. '19)

Most students see the convent every day, but many have no idea what it is or that it is owned by Padua.

Padua is home to more than most students ever see.

It was a few years into my time as a student that I realized the building across the street is owned by the school. That building, the convent, contains over a century of history. Today it is crumbling from the inside and falling into disrepair.

I remember as a freshman hearing about the secret fifth floor swimming pool, the one we weren’t allowed to see. It is not a swimming pool, obviously, but a fully functioning observatory that most students will never set foot in.

Some classes are taught in the annex, but the majority of the student body has little reason to enter the building.

A historic building itself, Padua’s campus has secret spaces that I took it upon myself to discover.

Across from Padua on W. 10th St., the convent stands as a reminder of the active nunnery it once was.

“It was a one-family mansion at one time. I think that family died out and so the Catholic Church bought it,” Mrs. Mann said as she walked across the street.

No student has been in it during my time at Padua, she said.

The space has been uninhabited for 11 or 12 years by her estimate. It was in bad shape even then, and would cost around seven million dollars to renovate due to the lead paint on the walls and poor overall condition of the building.

The convent was once a grand example of the wealth of the diocese. Today, nature is reclaiming it. The walls are decaying, and ivy creeps into cracks in the windows. There is an overwhelming sense of a lost past, as if the very building is still inhabited by the 20 or so nuns it once housed. Boxes of baking soda still sit on the countertop, and although the lights no longer work, natural light streams in through the windows. 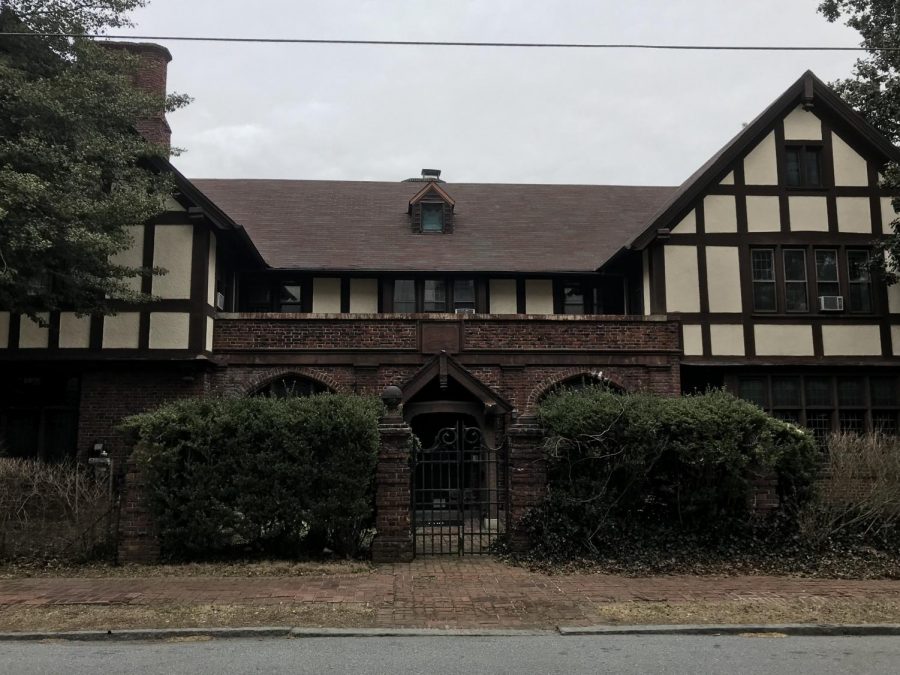 “You’ll see how the nuns’ rooms have been divided,” she said. “The cells, as they’re called.”

The small bedrooms, or cells, are especially evocative. Today only a sink remains in most, with peeling wallpaper and mold adorning the walls. One room had a pink cushion, and another flowery wallpaper.

“Everybody had a little twin bed, but this nun must have been really special,” said Mrs. Mann jokingly.

“It was a beautiful building,” she said. “But slowly the nuns died off. When I came, there were only three nuns that lived in this great, big house.”

These three nuns were elderly and soon moved out, leaving the building standing frozen in time.

“I just wish I had the money to restore it,” she said. “It’s so beautiful.”

Father Roberto hoped to provide creative and original spaces when he planned the construction of Padua’s main building.

“He was such an innovative thinker,” said Mrs. Mann as we took the elevator to the fifth floor. “Some of the things in this building were not typical of buildings in the early 1960s.”

The fifth floor has a door to the rooftop with a view of St. Francis Hospital and St. Anthony’s church.

Returning inside, on the first floor of the observatory hang posters of astronauts that looked decades out of date.

The observatory and an astronomy class once allowed students a glimpse into the sky, but today Wilmington’s sky is too polluted to see much more than light. 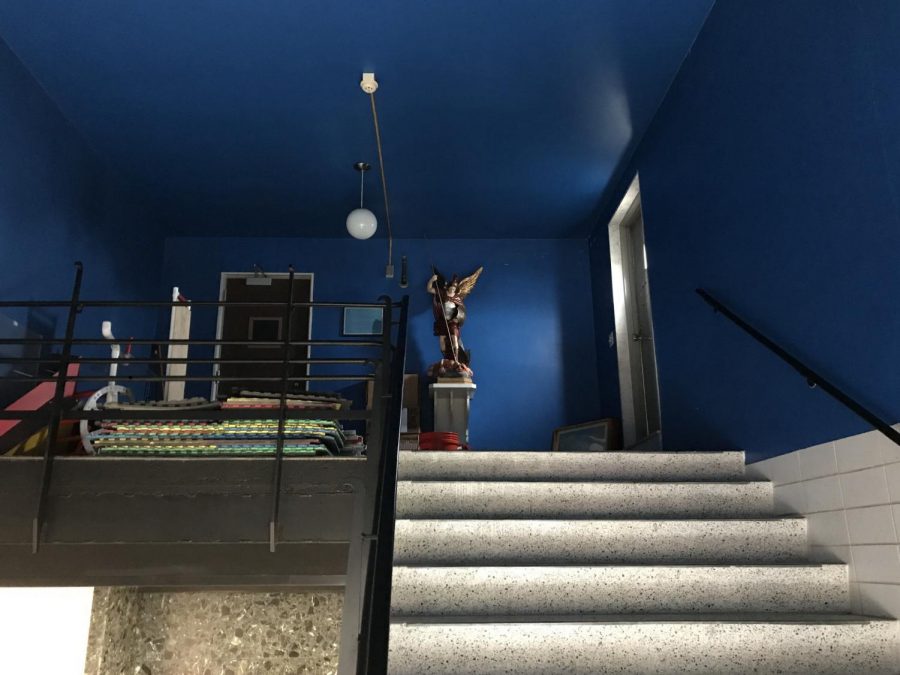 Gallery|5 Photos
Stella W. '19
The mysterious fifth floor is rarely seen by students. It's become a tradition to tell freshmen that it is home to a swimming pool.

“That’s why I said Father [Roberto] was really ahead of his time.”

Today it is used for storage, but she would love for it to become an office or a student center.

The annex, as it is called today, was once owned by the Presbyterian Church.

“The Presbyterians decided they no longer needed the space,” said Mrs. Mann. “They went over to see Father Roberto and asked him if he would be interested in buying it, and so they struck a deal.”

At first there were no offices or classrooms. The vice principal once lived on the second floor, evident by the kitchen and bathroom complete with a washer and dryer.

The building is primarily office space today, along with a few classrooms. Some students have been in the annex, but few have been up to the third floor.

“It’s scary up there,” said Ms. Scarpone as Mrs. Mann and I went up the stairs.

“Oh, it’s not scary at all!” Mrs. Mann responded. “We’ve got to get the place cleaned up, though.”

It was once the servant’s quarters, she said, but today is only used for storage. Mrs. Mann has a bedroom in the largest room, which she can use when she has major events to attend. Judging by the large box of Tostitos on the bed, it’s clearly not used much.

“I bought all this furniture, it’s all antique,” she said, looking at the empty dresser in the corner of the room. “I hate to see it unused.”

Another room houses graduation robes, and another costumes and an array of trophies.

“We need to spend some money over here,” said Mrs. Mann, pointing out a leak in the roof. “It’s just beautiful.”

Gallery|6 Photos
Stella W. '19
The annex was owned by the Presbyterian Church, and bought by Father Roberto when they no longer needed it.