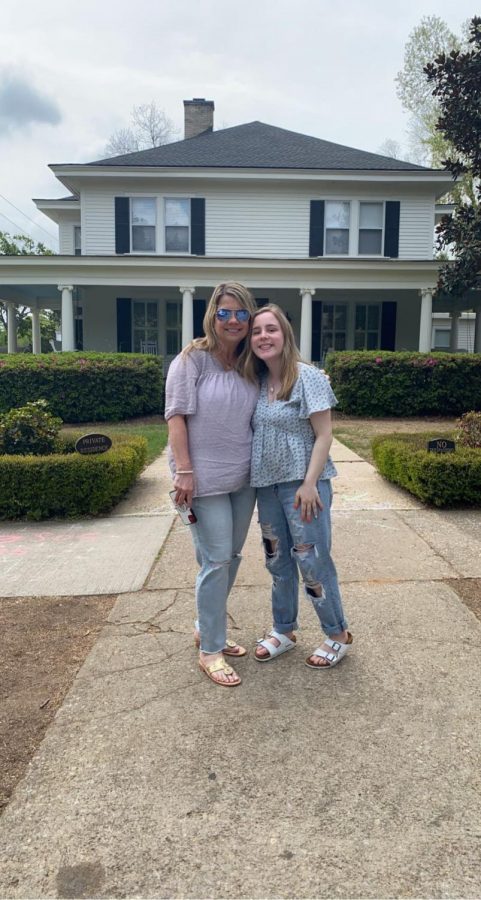 Meri Hilferty poses with her mom. She is the only fraternal triplet out of the three.

“Tory and Alex are identical and I’m fraternal.”

“Yes, they are always in my bedroom so yes.”

“Probably not because there’s still somebody else. There’s two of them so it’s annoying but yeah I feel like it would still be the same experience.”

“Yeah, it’s really hard and we’re both in the same classes, but it’s nice to have other people [I know there].”

“I probably wouldn’t be surprised because of genetics. I don’t know it would be fun.”

“Teachers still mess that up, a teacher did that today.”

Do you know any other sets of triplets?

“We were born prematurely at like 26 weeks so we had to stay in the hospital so that was stressful and scary.”

“Alex is the most outgoing. I am the quietest. I don’t like other people. I like to be by myself.”

“Alex is the most outgoing; Tory is interesting and bossy. They both team up. I would say we’re all pretty different but there are some similarities.”

How did you get your names?

“I think my mom just liked it. The Meri Rose was from my grandmother.”

“If I go to a friend’s house then Alex will go with me which is kind of annoying.”

“Probably always having someone to do stuff with. I like being alone but sometimes I like having other people.”

“Yes, if I give them something like a blanket but they don’t put it back so I’m not a fan of that, but I take stuff from them but I put it back.”

“I think as we got older it just got easier because they had people to help them.”

“Probably not. I don’t think we’ll end up going to the same college which is nice.”

If you could give advice to a family either having triplets or raising them what would you tell them?

“Take your time and make sure you have people there to help that you know what you’re doing.”