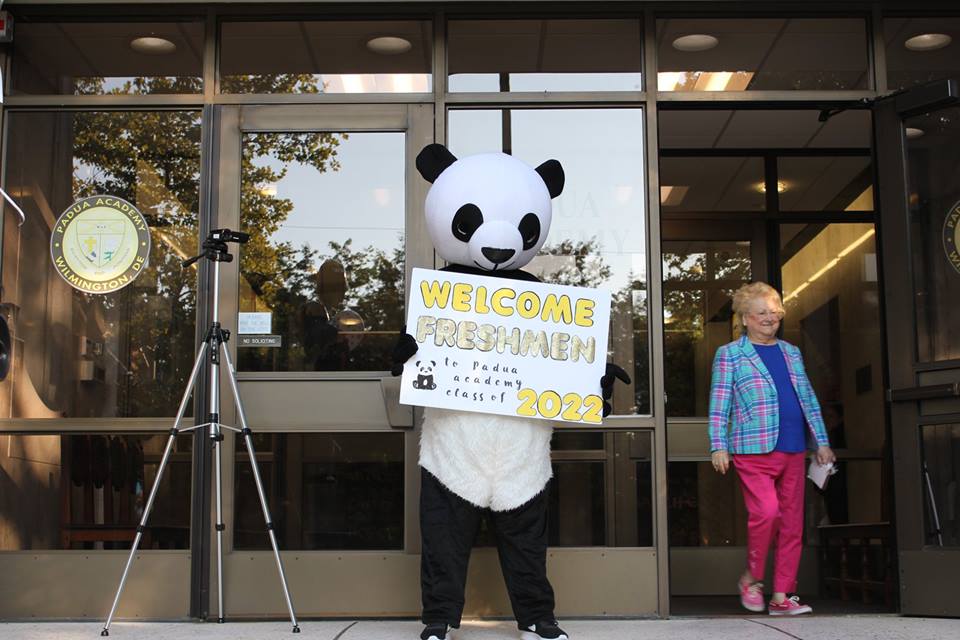 Mrs. Mann, right, welcomes the class of 2022 at the beginning of the school year. She announced that she would not be returning next year on Jan. 16, 2019. (Padua Academy)

Mrs. Mann, right, welcomes the class of 2022 at the beginning of the school year. She announced that she would not be returning next year on Jan. 16, 2019.

Deciding to retire was the hardest decision Mrs. Mann has ever made. Padua, as she put it, has been her life for the past eleven years.

“I just need to get a little more rest than I can get with this job,” she said.

The decision, she explained, was made with the guidance of God.

“I continuously asked God the same thing: ‘Show me what you want me to do. I want to follow in your path,’” she said. She described “a peace that comes over you that you know everything’s gonna be alright,” and her hopes of doing something meaningful next, although she is not yet sure what.

“I leave the doors open for God to show me what the next page is going to be,” she said.

I leave the doors open for God to show me what the next page is going to be.”

Mrs. Mann hopes to leave behind a sense of leadership instilled in each student.

In her absence, she hopes to see Padua “become the very best school possible for young women on the east coast.” She also hopes to be able to spend more time with her grandson in retirement.

Mrs. Mann announced her retirement on Jan. 16, surprising some students more than others. Most students knew it was going to be soon, but not all expected it to come this year. 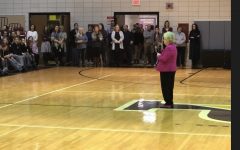 “I expected that Mrs. Mann would be retiring before the graduation of the class of 2021, but I didn’t expect it to be so soon,” said sophomore Kat Jennings.

“When she got to the [microphone] and said she had something to tell us, I kind of expected her to retire because she had been principal for so long and I knew she wasn’t feeling the best,” said sophomore Alyssa Barnak.

“I can’t honestly say I was all that surprised,” said freshman Clare Yeatman. “I figured she would retire one of my four years. I was hoping I would get her for a little longer than I did, but I’m happy that she was able to make this decision and I wish for only the best in her future.”

Senior Sarah Jane Mee wasn’t surprised by the announcement, but she did not feel prepared.

“She has had to endure a lot during her time at Padua, including troubles with her own health, her husband’s health, [and] the events of last year,” said Mee. “Mrs. Mann has stayed strong for us for so long, and now she is taking a well-deserved break.”

Mrs. Mann has stayed strong for us for so long, and now she is taking a well-deserved break.”

Mee hopes that the next principal is ready for the challenge of running Padua.

“If I could choose the new principal, it would definitely have to be someone who is used to working with strong women. Someone who is willing to fight for us, and support us when we need it,” she said. “Padua is full of intelligent, strong, and determined students, and our new principal needs to be prepared.”

Robin Land, a junior, hopes that the next principal is “somebody who is young and understands the students, but who still has the same enthusiasm and passion like Mrs. Mann has for the students.”

Barnak agreed. “I believe someone younger can connect with the students more and help improve our school,” she said.

Some students feel that Padua will be very different without Mrs. Mann, while others feel that her impact won’t be easily diminished.

“Although our principal is retiring, the lessons Mrs. Mann has left with her students will never diminish. The rules may change, but our sisterhood won’t,” said Mee.

Sophomore Molly Shapiro hopes the next principal respects the progress Mrs. Mann made, but won’t try to imitate her.

“I think it’ll be weird not having Mrs. Mann and not hearing her voice over the announcements will be sad, but I think she transformed this school in a very permanent way, and I don’t think much will change,” she said.

“I think that short-term there won’t be too many changes, but I think that long-term, it kind of depends on who takes over,” said junior Madalyn Lamb. “I think whatever their ideals are, and what their plans are for the school, that’s probably what will change Padua.”

Jennings wishes the next principal could be exactly like Mrs. Mann, but trusts that the replacement “will be a good fit for the students, staff, and the school in general.”

Dr. McClory, the current vice principal, was grateful to have worked with Mrs. Mann during her time at Padua.

Dr. McClory feels that Mrs. Mann has impacted Padua “tremendously” in numerous ways by bringing her many years of educational experience to the school.

“I think she’s really encouraged all of us to… take a look at the programs and the courses that we’re offering to make sure that they’re really the best that our students need and want,” she said.

According to Dr. McClory, one of the improvements made under Mrs. Mann’s leadership was the schedule realignment.

“By moving forward with doing a schedule analysis and coming up with a different schedule, it really expanded our opportunities to develop a variety of electives,” she said.

Dr. McClory expressed that she will miss Mrs. Mann’s energy and enthusiasm.

Mrs. Fundakowski, the academic dean, agreed that the new principal should focus on developing the core values of Padua.

“I would love to see the next person be someone who is as passionate about the mission of Padua as Mrs. Mann has been,” she said. “I think that we need someone who will continue to build bonds with students but also be able to continue to work with faculty [and] continue to support them.”

She recognizes that leaving was in Mrs. Mann’s “best interest,” and feels that she is leaving the school in a position enabling it to positively continue her legacy. Mrs. Mann got Padua’s name out into the community, she said, making connections in Wilmington that allowed for further development.

“When Mrs. Mann started here ten years ago, she brought with her an energy that was missing,” she said. “I used to say that Padua was Wilmington’s best-kept secret, and Mrs. Mann made sure it was no longer a secret.”

I used to say that Padua was Wilmington’s best-kept secret, and Mrs. Mann made sure it was no longer a secret.”

Mrs. Fundakowski hopes that the atmosphere Mrs. Mann has spent years developing will continue with the next leader.

The Board of Trustees will help to find the next principal, but the final decision will be made by Father Mark J. Wrightson and the superintendent, Dr. Louis De Angelo.

Mrs. Mann’s announcement did not come as a complete surprise to Father Mark.

“Earlier this year, she hinted at the fact that it might just be this year, so I was not totally shocked,” he said. “But I was actually shocked that she came to my office and… gave her paperwork with the retirement resignation… to me. We hadn’t really had a personal conversation about that.”

Wrightson explained that the board is currently in the early stages of finding a new principal. A search committee has been put together to review applicants, and an announcement has been sent out throughout the diocese and to other principals and administrators as well as in local Catholic publications. Names will be forwarded to him and the superintendent.

“From there, I sit with the diocese, and we work out and try to make a choice that we think will be best for Padua Academy,” he said.

Father Mark will base his choice for the next principal on his or her ability to lead, especially in terms of the day-to-day running of the school.

“I’m looking for a person who would be very immersed in academics and activities,” he said. “I know that that that can be very far-reaching and sometimes can be very daunting, so [we need] somebody that can really get immersed in the organization.”

It is likely, he explained, that in the following year the position of president will be established. This person would be responsible for managing external issues pertaining to the school.

“When that position is in place,” he said, “the principal basically becomes… the person who’s overseeing the student aspect of the school, whereas the president takes care of a lot of the alumni connections, the financial connections, building connections, all those things that sometimes we don’t always think of at the school.”

By making this decision, Father Mark hopes that more time will be devoted to these “external” matters.

“It’s a lot to ask of a principal, and it was felt that the time was right for us to move forward to establish that role so that those duties could be picked up and handled more on a full-time basis by a president.”

Moving forward, Father Mark hopes that Padua focuses on “keeping at the forefront its Catholic Christian identity, and in doing, so… be as a sign of God’s love for the church and… for the next generation with the young women that are in the school.”

While students and faculty may have some input in the decision, Mrs. Mann will play a role in selecting the next principal.

“Concerning Mrs. Mann’s role in the selection process, she has already and continues to play a vital role. She has contributed significantly to the conversations with the board and also with me concerning the qualities needed, the issues to be addressed and the candidates to consider,” Wrightson said. “While the selection process we are using has no formal slot for the outgoing head of school, her input to the process has already and will continue to contribute not only to the selection of a new principal but also to the transition to a president-principal model.”

Board member Jennifer Kenton feels that Mrs. Mann gave a direction and strategy to the school that will leave a lasting impact.

What I know of Mrs. Mann, she will never leave the job.”

“She’s given young women the foundation for an incredible future as leaders. She put together a program and a staff and a team that is delivering an example of how to be a leader. She’s not leaving, it’s just time for other very capable people to take the day-to-day,” she said. “She will stay involved with the strategy and opportunities to advance education and bring in programs… What I know of Mrs. Mann, she will never leave the job.”

Kenton hopes that the next principal will closely echo Mrs. Mann’s values with “a love for every student and a vision of the future in leadership.”

“I think that Padua is poised to be a model beyond the region,” she said. “It’s time for Padua to step up in the national spotlight and be held up and modeled in other places as a way to focus on the future for young women.”